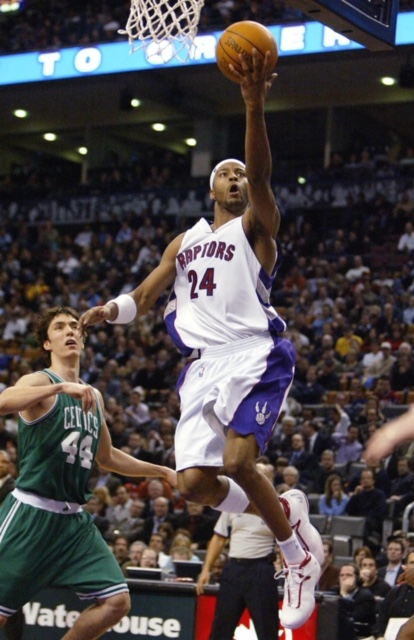 Morris Peterson Jr. grew up in Flint, MI where he was raised by his parents, Morris Sr. and Valarie Davis-Peterson who were both educators in the Flint Community School system.  Known by many as “Mo Pete”, he is the product of Flint Northwestern High School.  After not making the varsity basketball team in his freshman year Peterson had to work his way up in Flint Northwestern’s basketball program that was led by legendary head coach Grover Kirkland.  That hard work helped Mo Pete achieve All-State, All-City and All-Valley honors and he became one of the top forwards in the country.

The next step in Peterson’s journey led him to Michigan State University where from 1995-2000 he was a member of the basketball team under head coach Tom Izzo.  As the first of the “Flintstones” on the team Peterson had to learn and mature after his freshman season.  The hard work ethic he learned from growing up in Flint helped him turn around the MSU basketball program on their way to becoming a national powerhouse.

As a junior, Peterson averaged 13.6 points and 5.7 rebounds, becoming the first sixth man to earn first-team All-Big Ten honors. In the NCAA Tournament he scored a game-high 19 points to help MSU beat Kentucky in the regional finals, advancing to its first Final Four in 20 years.

Peterson averaged 16.8 points as a senior, was named Big Ten Conference Player of the Year and was a national All-American.  That same year Mo Pete and the MSU Spartans went back to the Final Four and became the 2000 National Champions in a 89-76 victory against Florida.  Peterson finished his career at Michigan State with a total of 1588 points and 146 three pointers.  In 2009 Michigan State retired Morris Peterson’s #42 jersey.

Mo Pete continued his basketball career in the NBA after he was selected 21st overall by the Toronto Raptors in the 2000 NBA Draft.  In his rookie season Peterson made the NBA All-Rookie Team and went on the have an 11-year career in the NBA.  Known for being able to score on the inside and on the perimeter, Morris scored 7628 points in his career and made over one thousand three pointers.  Peterson also held the longest active streak of consecutive games played with 371.  After playing for the Raptors he continued his career with the New Orleans Hornets and the Oklahoma City Thunder.

After retiring from professional basketball Morris Peterson started the “Morris Peterson Jr. Foundation” which gives back to the city of Flint through several different programs and events.

Morris Peterson you are the true definition of being “Flint Strong”! You have made Flint proud.  Welcome to the Greater Flint African American Sports Hall of Fame!