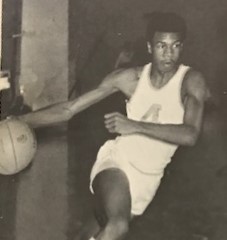 Leonard “Herb” McDaniel’s journey started in Flint, MI where during the civil rights movement he was able to fight for change on and off the court.  Herb was a captain for the Flint Southwestern basketball team where he played for three years and helped lead them to their first Saginaw Valley Championship in 1971.

As a junior he averaged 19.1 points per game and his scoring ability would only improve throughout his career.  McDaniel made second team on the Eastern Saginaw Valley Cage All Stars team and was the only junior to make the team.

In his senior season Herb was a part of a school protest that led to important changes being made among the staff and administrators in favor of equality at Flint Southwestern High School.  On the court Herb broke the Flint Southwestern school record for points scored in a season with 440 points and helped Flint Southwestern win a district championship.  That same season Herb also led the team in rebounds and against Flint Northwestern he scored 41 points, which was a career high.  McDaniel also made first team on the Eastern Saginaw Valley Cage All Stars team.

While at Flint Southwestern Leonard “Herb” McDaniel earned All-Valley honors twice and was an honorable mention for All-State.  Known for his excellent shooting he averaged 22 points per game over his career and graduated from Flint Southwestern as the school’s all-time leading scorer with 874 points.

Herb continued his academic and athletic career at Genesee Community College, now known as Mott Community College, where he averaged 24.3 points per game as a freshman.  At GCC he won a Central Division Championship and was named to the All-Region and All-Conference teams.

One of McDaniel’s highlight performances came against Battle Creek Kellogg where he scored 37 points. Herb finished the season with 608 total points, leading the Michigan Junior College Central Division in scoring.  Herb also earned 1st Team MJCCD honors as a freshman and considered to be one of the top players in junior college.  Herb McDaniel went on to play basketball in numerous other leagues in and around the city of Flint.

Leonard “Herb” McDaniel you are the true definition of being “Flint Strong”! You have made Flint proud.  Welcome to the Greater Flint African American Sports Hall of Fame!